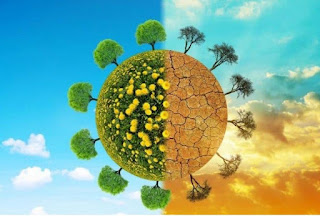 The year 2021 is not much different from last year. Last year, a joint comprehensive report by leading NGOs on the environment and climate change revealed that global warming is just as dangerous and alarming as global warming. A comprehensive overview of the devastation that global cooling has wreaked on the planet is included in the report. In countries near the region, temperatures dropped to minus forty to fifty-five.

The societies of developing countries have poverty, backwardness, low literacy, and also intellectual backwardness. Yet most developing countries are not even fully aware of the environment, climate change, and increasing pollution, as the poor people of these societies are embroiled in their own economic woes, including inflation, disease, injustice, and other issues.

On the other hand, the map is the opposite. The upper classes of societies and beyond, the world's most prosperous handful, the so-called monopoly capitalist class in common parlance, have an abundance of capital, occupying 64% of the world's total wealth, while more than eight billion people depend on 8% capital. Recent reports on environmental degradation and climate change are also not positive.

Forest fires in California and wildfires in Australia were the cause of global warming, yet some quarters deny the fact that global warming is a serious problem for the world. Some quarters have been spreading this propaganda. In fact, multinational corporations will not give up the way they are running their horses for development, competition, and more competition.

To build an environmentally friendly society and reduce pollution, the world will have to reduce its luxuries and change its lifestyle. The use of cars, refrigerators, air conditioners, and other electrical appliances in the world has increased fivefold in the last fifty years. The use of natural fuels in industrial plants, railways, and airplanes has been increasing at the same rate, while the irrational adventures of terrorism have inflicted innumerable wounds on humanity.

The irony is that the rapid growth of the world's population has led to people snatching each other's food. Most of the countries in Africa, Latin America, and Asia are said to be severely affected by food shortages. ۔ Recent studies have also drawn attention to this. Contaminated water and garbage from industrial plants and ships are being dumped into the oceans, posing a serious threat to aquatic life.

According to experts, half of the world's aquatic life has become extinct, including some valuable and rare species of aquatic life, which are now extinct. In such a case, it would not be wrong to say that human lust, selfishness, and inconsistency, did not spare even the land, the sea, and the atmosphere.

The United Nations World Health Organization (WHO) said in a recent report that India had been warned in 2005 that rising pollution in India kills between five and six million babies a year before birth. It has been reported that various diseases are becoming common in India due to the growing trend of smoking and substandard diet. In another study, the World Health Organization (WHO) said that in most countries, including European countries, the increase in pollution, especially air pollution, is reducing the average age of people by five to seven years. The European Union's Environment Agency has recommended to the World Health Organization that a special tax be imposed on aircraft in Europe.

On the other hand, civil wars and conflicts have been going on for a long time in the African countries Sudan and Ethiopia. Sudan is experiencing political turmoil and riots between linguistic and regional groups. Recently, the Sudanese Armed Forces announced the imposition of martial law in the country, but thousands of people took to the streets and the country was in danger of major clashes and bloodshed, so the martial law failed. Linguistic and regional divisions have caused severe political and economic turmoil in Sudan.

Sudan is already divided into two parts, with positive effects on neighboring Ethiopia and sub-Saharan Africa. In this regard, the UN Secretary-General recently warned that a major humanitarian catastrophe could occur in the region if the African Union and other agencies fail to address the ongoing civil war and political turmoil in Sudan. "If we abandon peace, moderation, and understanding, anything can happen and whatever happens will be bad for all of humanity," he added.
Climate Change Environment Food Global warming Population WHO