Gulmarg is a famous tourist place or hill station which is a popular skiing destination in India. It is situated in the Pir Panjal Range which is clearly visible as the western marker of the 8126 meters high Nanga Parbat of the Himalaya mountains. There are also several other peaks that ring the whole area.  It is located 54 KMs away from Srinagar.  It has been the favorite of the many kings like Yousuf Shah Chak and Jahangir who used to visit frequently.

The old name of Gulmarg was “Gaurimarg”, which is believed that it is the name of Lord Shiva’s wife. Yousuf Shah Chak( once the King of Kashmir) changed its name to Gulmarg, which means the place of roses. During the early part of the 20th century, the famous Central Asian explorer Sir Marc Aurel Stein(Hungarian-born British archaeologist) made his home here in a tent between his expeditions. It was a favorite summer holiday destination for the British stationed in India.

Gulmarg's unique beauty, location, and nearest to Srinagar Airport naturally make it one of Asia's premier hill resorts. Today, Gulmarg is not merely a mountain resort of exceptional beauty but also the country's premier ski resort in winter when it is covered in snow and takes on the appearance of a picture postcard. Among all seasons Gulmarg in winter is a magnificent experience, fully covered in a white blanket of Snow which turns it into a skier's paradise. The natural hill slopes here are a challenge to ace skiers. Besides the pretty side to Gulmarg, wintertime in Gulmarg is a season of festivities with celebrations of “Christmas” and many more parties.

Gulmarg was first established as a ski resort before the independence of India by the British. Gulmarg had become very popular before the pre-independence years of India for skiing. The resort used to host two major skiing events. In 1938, nearly 500 skiers are said to have participated in different ski races. Gulmarg's atmosphere for skiing is very nice which was identified with European ski resorts of the 1950s. It has good sunshine as well as good snow.

The skiing season usually commences just before Christmas (mid-December) and continues till early April. In 1998, Gulmarg hosted the first-ever  National Winter Games of India. It hosted the 4th National Winter Games, which were also held here during 2003 and 2004. Gulmarg is well suited for learning skiing. It has some of the best slopes for beginners and intermediate skiers, all serviced by ski lifts and chair lifts. Most of the skiing activities are centered on these slopes, which have ski runs ranging from 150 to 1000 meters.

Good quality equipment including skis, boots, sticks, gloves, and goggles, are all available on hire from the Government as well as privately run ski shops. Trained instructors are there for guiding nonprofessional skiers. All the tourists who visit Gulmarg do not come for skiing. Some are simply there to enjoy a holiday in the snow. The Gondola Cable Car of  Gulmarg has become the highest lift-served ski resort in the world providing a downhill ski run of almost 5.3 km from a height of 14,000 ft in the Apharwat range. 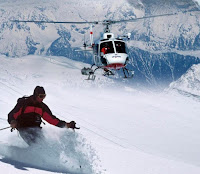 Heli-skiing was introduced in Gulmarg, for the first time in India during the mid-1980s in collaboration with the world-renowned French skier, Sylvain Saudan of Himalaya Heli-Ski Club of France. For this highly exciting sport, skiers are taken to the top of mountain ridges by helicopters or by Gondola lifting(in Gulmarg only) from where they ski down the immense Himalayan slopes. Initially, the program was started in Gulmarg(Apharwat). Subsequently, other sites in Kashmir such as Pahalgam And Sonmarg were also used for this purpose. The program was suspended during the 1990s, but now it has been revived again.

Gulmarg is also offering to host other snow sports this year. The most popular sports among the tourist children and women are riding a sled and being pulled along the snow-covered roads or gentler slopes. Tobogganing(

the activity of sliding downhill over snow on a toboggan) which is also a popular one also does not require any skill. It is famous among children there. In this activity, a flat wooden board is taken up the hill and then allowed to slide downhill.

Snowboarding, another exciting winter sport, is also being introduced and promoted here. Most of the tourists like making a snowman and holding campfires around it. The most enjoyable aspect of a winter stay in Gulmarg is its friendly atmosphere. It is like being in a family where everybody knows everyone else.

Places to visit in Gulmarg

Are you visiting the Gulmarg for a vacation during winter and wondering where to go? There are so many best places to visit in Gulmarg as it is one of the best places to visit in Kashmir in winter with family and friends. Gulmarg Gondola, Gulmarg Golf Course, Alpather Lake, Gulmarg Biosphere Reserve, Strawberry Valley, Ferozepur Nallah, and The Maharani Temple are some of the places where you can enjoy the serenity.

Gulmarg is attracting millions of tourists throughout its existence with the mindblowing beauty of the Himalayan Mountains in the backdrop. Gulmarg Gondola is the  Highest Cable Car in the world and is the longest gondola-served ski-lift in Asia. It is one of the main attractions in Gulmarg. The 1st phase of the Gondola takes tourists to the height of 8530 ft to Kongdori Station and the second stage of the Gondola goes up to the height of 12293 ft to Aparwath Station. Gulmarg Gondola. Gulmarg Ski Resort

Embark on a journey to a place that combines snow and big mountain skiing, cultures, and above all, thrill. Gulmarg Resort is a big ski hill at about 4000 meters with the summit of Mount Apharwat about 100 meters above it. This provides about 1500+ meters of vertical and legendary terrain. The resorts provide high-quality equipment and experienced training staff.

Gulmarg which is also known as Ground of Flowers is the most beautiful hill station of Kashmir. Apharwat Peak is situated in Gulmarg at the height of 14403 feet above sea level. It remains covered with snow almost throughout the year.  It is popular for its ultimate skiing destination.

Rani temple is located in the heart of Gulmarg town. It is one of the last remnants of the Dogra Dynasty, which once ruled the state of Jammu and Kashmir. The temple was built by Dogra Maharaja namely Maharaja Hari Singh who dedicated it to Lord Shiva. It is named Rani Temple because Maharaja’s wife Maharani Mohini Bai Sisodia used to perform prayers every day in it. 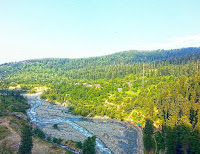 A few kilometers from Gulmarg is this beautiful white stream of Nigle Nallah.  It later merged with the River Jhelum near Sopore. Wide grassy pastures located the stream from a perfect place for a family picnic with light snacks and yes, lots of pictures you can even set a camp here. One can sit here for hours and admire the surrounding meadows, chirping birds, gushing sounds of water, and the rich culture of this dream-like location.

Alpather Lake lies at the foot of 4511 m between twin peaks of the Apharwat. It is a triangular-shaped lake and features a backdrop of snow-covered mountains, breathtaking to say the least. A cool breeze gently touches your face as you stand near the lake, which remains frozen until mid-June. Post-June small flecks of ice with clear blue water are seen floating on the surface of the lake.

Baba Reshi Shrine Located in between Tangmarg village and Gulmarg, is the beautiful shrine of Sufi saint Baba Payam ud Din Reshi. It is a three-story monument situated at an altitude of about 7,000 feet. This is a popular tourist and pilgrim destination and is said to have given all his belongings to serve common people. He lived at this location that later became his tomb site.

This park is dedicated to children which has breathtaking surroundings. This park has beautiful views which are surrounded by big mountains on all the sides. Its entrance has a token system having minimal charges.

Now how to reach

If You Come Here By:-

The nearest airport is in Srinagar. Sheikh Ul Alam International Airport. Distance is near about 54 KM to visit Gulmarg

The nearest railhead is at Baramulla. The distance is near about 53 KM

To visit Gulmarg by Road from Jammu is about 410 KM, If you want to travel from Srinagar it's about 54 KM and From Baramulla, the Distance is 54 KM.