Showing posts with the label Sheshnag
Show all 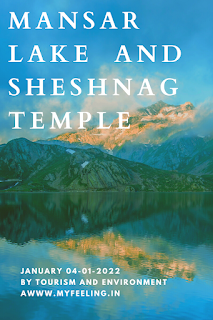 Mansar Lake  And Sheshnag Temple   Mansar Lake is a popular tourist attraction in Jammu and Kashmir . It is located 25 km away from Samba town, on the national highway NH-8. According to the records, the lake was formed about two thousand years ago. Mansar lake is classified as a lake by the Department of Scientific and Industrial Research (DSIR). Flooding in the lake occurs every year during monsoons but the lake has not flooded for more than twenty years. The present population of Mansar Lake is mainly Hindu. The locals believe that this place was once ruled by a legendary king named Manas, who brought prosperity to his kingdom through his generosity and kindness towards his subjects. He was famous for giving each of his subjects one wish which he granted immediately upon their request at any time during their lives, without fail. This legend makes Mansar Lake one of the prime tourist attractions in Jammu and Kashmir.   The holy water from these holy places has been used for rel
Post a Comment
Newest Post
More posts